Yangon is the biggest city as well as the former capital and Major gateway to Myanmar. Before 1775, Yangon known as Dagon by the Shwedagon Pagoda. In 1775 the King Alaungpayawas found the Konebaung Dynasty conquered Lower Myanmar and renamed as Yangon. Yangon also known as the ‘Garden City of the East ‘ beacause of it evergreen tropical trees, shady parks with beautiful blossoms and lakes .Yangon city is divided into 39 townships and covers an area of 400 sq.km and has a population of approximately 6 million. The most fascinating Place in the city which dominates the skyline of Yangon with 98m tall is Shwedagon Pagoda . It’s also the landmark of Myanmar. The golden dome is covered with 11toms of pure gold with 1800 carets of Diamond and other precious gems . Another attraction Places in Yangon are National Museum where national and culture heritages of entire Myanmar are preserved , Bogyoke Market wher the local Jewelleries, art and crafts are available, Sule Pagoda with unique architectural style, 70m long Chaukhtatgyi Reclining Buddha Image , Kabar Aye Pagoda and MahaPasana Cave where the sixth Buddhist Synod was held .
Yangon, the most heavily populated city in Myanmar with four million has streets that are safe any time of the day and night. The city has the river port as it is bounded to the south and west by the Yangon River. Yangon has a lush, park like and tranquil atmosphere as soon as one leaves the relatively small downtown area.
Yangon has some interesting culinary possibilities since there has Chinese, Indian, Japanese, Thai, Vietnamese, Korean, French, Italian restaurants. For the transportation, tour operators use deluxe sightseeing vehicles. Taxies are available everywhere in the city. All other tourist destination has been accessible from Yangon by Air or by Land. 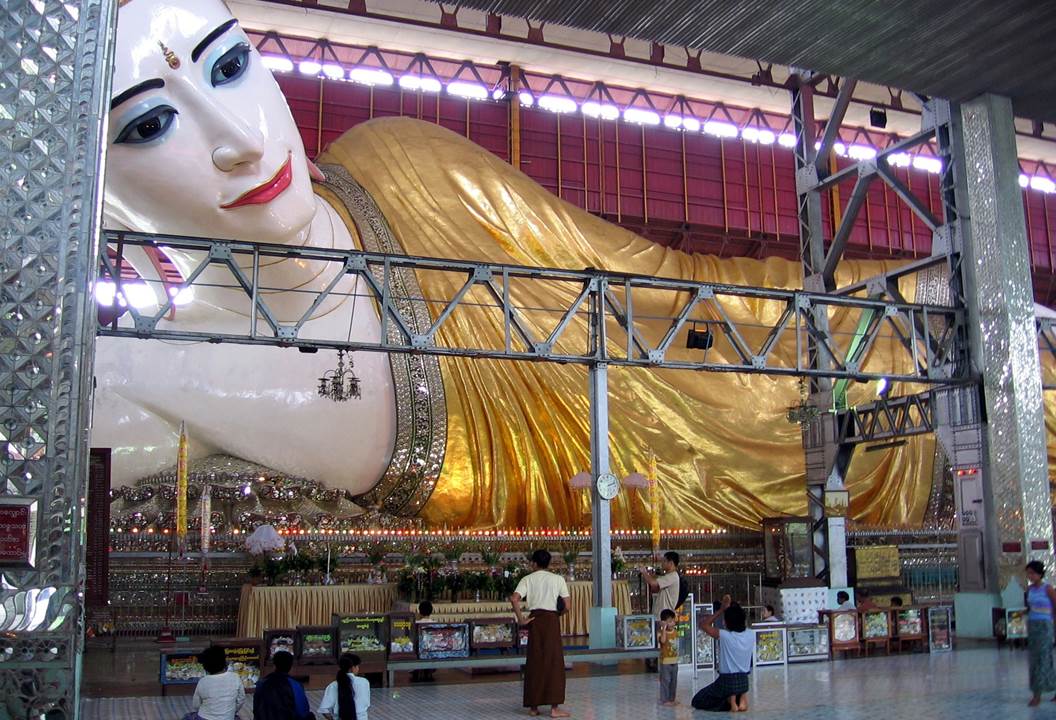 Thanlyin is situated at the confluence of the Yangon and Bago Rivers, to be exact, on the southern bank of the Bago River. The colonial town of Thanlyin was built by the British for its port and petroleum fefinery plant .It is also a sub- urban town, a few miles away from Yangon ,across 1.5mile- long bridge, Attraction places in Thanlyin are Kyaik –Khauk Pagoda and Yele Pagoda. 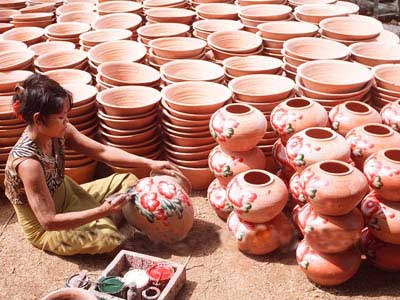 A boat trip to Twante (24km from Yangon) along the Tawnte canal takes about 2hr. Twanteis noted for its pottery and cotton weaving industries and also affords visitors an opportunity to see life along the canal.

The Famous Legendry Pagoda on the Golden Rock is about 160km from Yangon , Located in the Mon State . This Pagoda is situated on a rocky mountain 3615 ft above the sea level. The season of pilgrimage is from October to May. According to legend Pagoda has been build during the life-time of the Buddha over 2400 years. It is the third most important Buddhist pilgrimage site in Burma after the Shwedagon Pagoda in Yangon and the Mahamuni Pagoda in Mandalay.

Pyay (Prome) is only 288km north of Yangon , situated on the eastern bank of the Ayeyarwady River, is an important commercial center for trade between the AyeyarwaddyDelata, Central and Upper Myanmar and the Rakhine State. Sevral trains run daily from Yangon ever since the first railway line served in Myanmar in 1877 . Pyay was Anglicized as Prome after the second Anglo –Myanmar war and in ancient times was known as Thay- khittra (Sri Ksetra), the ancient Pyu Capital about 5 miles to the east , is interesting place to visit because of their historical importance and archaeological sites. Attraction places in Pyay are Shwesandaw Pagoda. Sehtetgyi Pagoda, Baw BawGyi Pagoda, Payama Pagoda and Ahkauktaungwhivh was the custom Port in the ancient time and it is known for its carving of Buddha images on the cliff along the river. Normally we do it as a stop over between long drive of Yangon and Bagan.

Nay Pyi Taw is the capital city of Myanmar , is located between the BagoYoma and Shan Yoma mountain ranges . The previous capital is Yangon, on 6 November 2005, the administrative capital of the country was officially moved to a greenfield 3.2km west of Pyinmana, and approximately 320km north of the Yangon. On 27 March 2006 the capital’s official name Nay Pyi Taw was announced. The city covers an area of 7054.37 sq.km and has apopulation of 924608. It is also one of the host cities for the Southeast Asian Games. Attraction places in Nay pyi Taw are Uppatasanti Pagoda, the Gem Museum, Myoma Market, Water Fountain Garden, ThattaThattahaMahaBawdi Pagoda and Zological Garden.